Of giants and dwarves…

Posted on November 7, 2017 by seaviewwarrenpoint

My haibun, ‘Finding Narnia’ inspired by this grove of twelve redwoods in Kilbroney Forest Park, Rostrevor, is featured in the January edition of Contemporary Haibun Online.

With its 1,200-year history, Kyoto is a city that constantly evolves with the seasons. From kimono colors to Japanese treats, seasonality plays a major part of the old capital of Japan, which is exactly why it has such a rich connection with haiku poetry. In this special episode, we enjoy some wonderful Photo Haiku from our international viewers straight from the center of Japanese tradition and innovation.

The photo haiku I entered in the December episode of Haiku Masters (in Kyoto) is discussed by the judges in the programme. I must admit, I watch each episode with a sense of both dread and excitement as sometimes the judges point out aspects that they feel don’t work so well. Happily, this time both were very complimentary. I used a similar photo to the one below, but with the following haiku…

whisper of wings
the park warden talks
of an extinct species

Guest judge, writer Hisafumi Iwashita says, “I found the poem fascinating – the photo too. It looks like the leaves are rotting…also rotten leaves have a strong odour. And rather than a bird I imagined the sound of insects, not a strong fluttering of wings but more like the simmering of lots of tiny insect wings humming faintly. And what lies beneath might be the remains of a spent or extinct species, or just a withered seed to a particular life. Which is it I wonder? …Life repeats itself endlessly on and on, over and over and the forest is just a stage where the circle of life plays out. The continuation of life is a sacred thing – the same with our lives. But even though it is a holy thing, there is also something eerie about it. That is why I thought it so fascinating.” 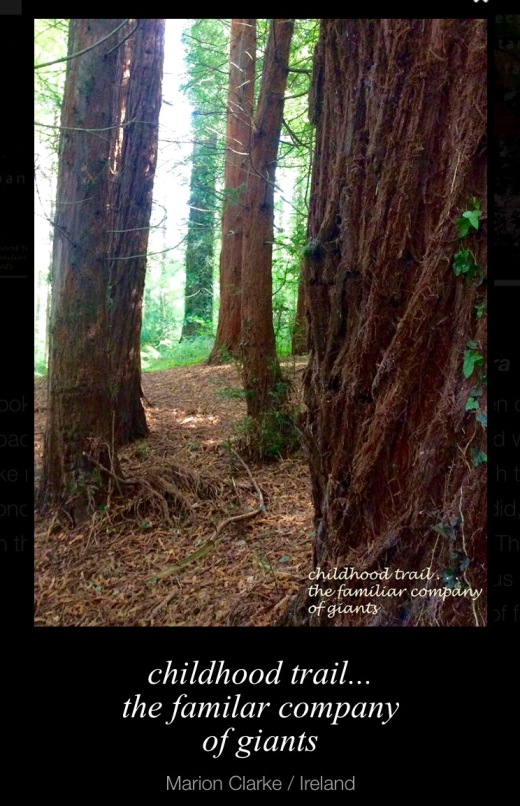 This photo haiku was runner up in Haiku Master of the Week, a feature of the award-winning Japanese TV programme NHK Haiku Masters. It was inspired by my photo of twelve redwoods on the ‘Tree Trail’ in Kilbroney Forest Park, Rostrevor. Due to our much cooler climate and winds that blow in from the Irish Sea they will never grow to be giants like their Californian cousins.

I was also thinking of how this area and the Mountains of Mourne inspired the writer CS Lewis when he was creating the land of Narnia. He said that, “at any moment a giant might raise his head over the next ridge.” When he moved to England, he obviously pined for home when he declared, “I yearn to see County Down in the snow, one almost expects to see a march of dwarfs dashing past.” 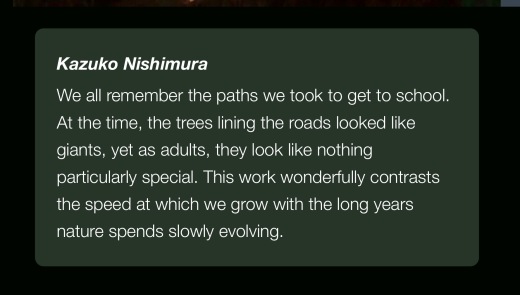 I am a writer, poetry facilitator and artist from Warrenpoint, Northern Ireland. My blog is https://seaviewwarrenpoint.wordpress.com/ Twitter @MarionSClarke
View all posts by seaviewwarrenpoint →
This entry was posted in haiga, haiku, Haiku Masters, Ireland, Mountains of Mourne, photo haiku, Photos, Places, Rostrevor and tagged Haiku Masters in Kyoto. Bookmark the permalink.

10 Responses to Of giants and dwarves…