NaHaiWriMo – I’m up for it

Posted on February 1, 2012 by seaviewwarrenpoint 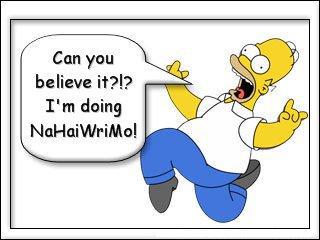 I’ve decided to commit to participating in NaHaiWriMo this year, the haiku equivalent of National Novel Writing Month during which you write a haiku every day for the month of February. On the NaHaiWriMo site, a prompt will be given each day which you can use, or you can come up with your own inspiration. I sometimes write my haiku from things I’ve seen or heard as I walk my daughter to school, for example, if there’s a particularly striking dawn or the morning sun falls in a certain way on chimney pots. However, I’m sure there won’t be 28 days worth in that short walk so the prompts will no doubt come in very useful.

Anyway, I almost forgotten about this writing event until I spotted it on The Haiku Foundation Blog about an hour ago, so I quickly rustled up a haiku, which is not how I’d usually do it.

Day one’s prompt was ‘apple’ and I drew upon my memory for this one.  I spent a year studying in Bristol after doing my degree in Belfast and I (for some, unknown reason) soon came to associate that part of the world with cider and scrumpy – the stronger, cloudy version.

At the time, I was working on an oil painting of the Clifton Suspension Bridge, which spans the Avon Gorge and I wanted to represent the feeling of elation I had at finishing the painting. I hope you like it! 🙂

on the suspension bridge

I celebrate with scrumpy

I am a writer and artist from Warrenpoint, Northern Ireland. My blog is https://seaviewwarrenpoint.wordpress.com/ Twitter @MarionSClarke
View all posts by seaviewwarrenpoint →
This entry was posted in haiku, Writing Events and tagged Bristol, Clifton Suspension Bridge, haiku, NaHaiWriMo, scrumpy. Bookmark the permalink.

6 Responses to NaHaiWriMo – I’m up for it