Posted on November 8, 2011 by seaviewwarrenpoint 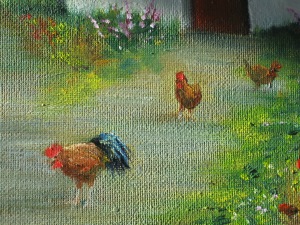 Well, Saturday turned out to be a rather unusual day. I had a phone call on Friday afternoon from local journalist and radio presenter, Rowan Hand. He had visited the recently-opened Reflections in Paint exhibition by our art group, Point Artists, in Newry library’s new art gallery. Mr Hand wanted to know if a few of our art members would like to come to the studio to record 20 minutes of discussion on our work and on the art scene in Warrenpoint for his Saturday morning radio show. What we didn’t realise until we got there was that it was a live recording.

Myself, Colm Sherry and Rian McKay took up the challenge and after negotiating the door of the studio (maybe it was nerves, but from where he sat it must have looked like we’d never managed to open a door in our lives) he waved to us and announced into the microphone, “Okay, everybody, I’m pleased to inform you that the artists from Warrenpoint have just arrived…and they come bearing gifts.” Gulp. When the ads were switched on we had a few minutes to settled ourselves into our seats, arrange the mics and pass our paintings over for discussion – then we were on air!

I can honestly say I can’t remember anything I said…I can remember what the other two were asked and replied, but not me. I was thinking that perhaps it was better that way, so that I wouldn’t suffer at a later date, when I recalled how brain dead I’d sounded. However, that afternoon we were scheduled to meet up with the local paparazzi for a photo shoot on the seafront, and one of them said he had heard the feature that morning, and that it sounded really good. I was relieved to hear that, but I still don’t reckon that radio broadcast is the media vehicle for me.

Anyway, it transpired that the Newry City mayor  had been attending another event nearby, and when he arrived in the Whistledown Hotel afterwards one of the reporters suggested we might like a pic taken with him to promote our exhibition. He said yes and we were delighted when he accompanied us over to the beach. I must say, it was slightly surreal to find myself being snapped by four photographers while standing on a big pile of seaweed with the mayor holding one side of my painting. Oh well, if it gets the exhibition some publicity, it was worth it…

So, if any of you are in Newry shopping between now and the 26th November, you can catch the exhibition (no admission charge) at the library in Hill Street. There is some really nice stuff on display (she said, trying not to be biased 🙂 )

Oh, by the way, the scene above is from a commission I recently completed. As it is not with the new owner yet, I thought I would just put up a detail from the painting.

I am a writer and artist from Warrenpoint, Northern Ireland. My blog is https://seaviewwarrenpoint.wordpress.com/
View all posts by seaviewwarrenpoint →
This entry was posted in Art and tagged original art; Irish art; Mourne cottage; cockeral; oil painting; art exhibition; Newry;. Bookmark the permalink.