Posted on January 20, 2020 by seaviewwarrenpoint

When I was asked to paint An Cloch Mór, or ‘The Big Stone’ as it is known locally, I panicked at the thought of making a huge granite boulder on top of a mountain the subject of a painting. But the client, who had moved to England some time ago, wanted a scene to remind him of home, and it was easy to see why he requested this iconic image with its surrounding views of oak forest, Carlingford Lough and beyond.  In fact, it really is a stunning vista from up there.

Located 300 metres above the village of Rostrevor, in County Down, I remember believing the story that it was thrown by Finn Mac Cool during a fight with a Scottish giant. However, geologists explain its presence by suggesting that it was deposited by a glacier during the Ice Age.

The Big Stone was a large feature in my childhood and later youth.  When we were very small, my father used to drive us up there at Easter. He would find a whin bush (gorse) and put a handful of the yellow flowers with some hens’ eggs into a saucepan and place it on a camping stove to boil. The whin blossom would colour the eggs, and once cooked, we would roll them down a hill. The winner was the child whose egg was still intact at the bottom — although from memory very few ever were!

In later years, as a teenager, every Easter Monday saw a pilgrimage of young people walk the few miles from Warrenpoint and up through Kilbroney Forest Park to the famous granite boulder. At the top, we would lark about with friends, usually with a beverage (not usually a soft one, I must admit) until sundown.

As an adult, I have taken visiting friends to the spot many times and I never tire of the walk. The area has been declared a National Nature Reserve and an Area of Special Scientific Interest.

My ‘portrait’ of The Big Stone is painted in acrylic on canvas. I hope you like it. 🙂 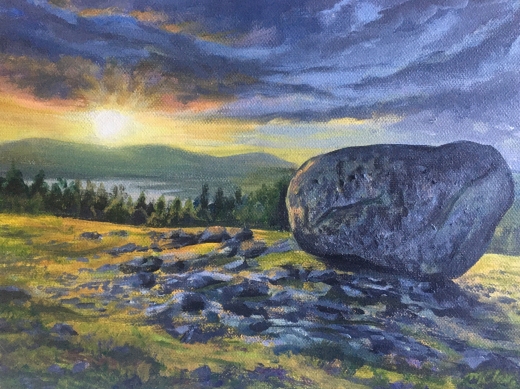 The Label, the Map and the Jukebox

Posted on June 13, 2019 by seaviewwarrenpoint

I must admit, I’m a sucker for quirky ways of distributing poetry. There’s something very enjoyable about watching the reaction of the public when they have been unexpectedly exposed to a poem.

Belfast-based, Fermanagh poet Maria McManus is the artistic director of two literary projects that do just this, and I was fortunate to have been involved in both earlier this year.

The most recent- LabelLit – went live on Poetry Day Ireland last month and involved the distribution in public places of over a hundred brightly coloured luggage labels from sixty poets. On each label the poet had written or typed a ‘teaser’ line from one of their poems. 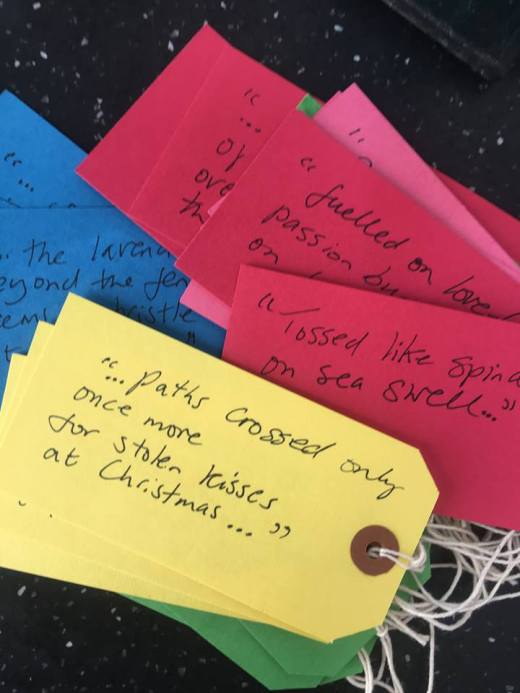 Whoever found a label was asked to Tweet a photo and, on the first day of the project, the person who found one of mine fluttering at the end of Warrenpoint marina turned out to be the daughter of an old school friend with whom I’d lost contact decades ago. Small world and all that…

This year LabelLit introduced the Poetry M’App, a feature that enables you to click on a location and listen to a poem inspired by that place. To hear a poet reading his or her work just visit the map below to go directly to the site. Wherever there is a map pin, there is a poem! 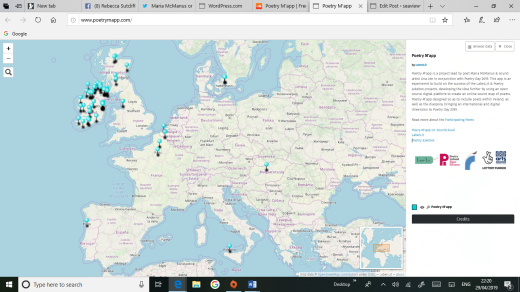 Two of my poems were included in this project, the first inspired by a stiflingly hot afternoon in the French countryside of Courtemanche, Picardy. ‘Placement Year‘ is also available on Soundcloud. The second, ‘The Island Affair‘, was inspired by a memory of a special time spent on Owey Island, just off the coast of County Donegal.

As an added bonus, participants the LabelLit project received these inspirational words on a luggage label from former Beirut hostage, Brian Keenan, which I will always treasure. 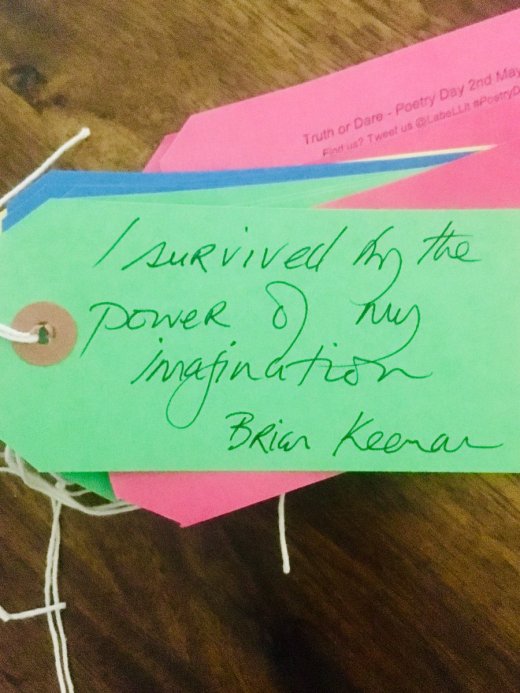 “What I knew for sure from the start was that there would be poetry because Ireland and poetry have become collocated in world literature. Think poetry and think Ireland…The actual job of choosing the 20 poems that would be exhibited was tougher than I expected.”

The second project involved the strange, tube-like contraption that is The Poetry Jukebox. The theme, In a Deeper Country, was inspired by the work of C S Lewis and jointly curated by Maria McManus and Tade Ipadeola, Nigerian poet, essayist, translator and lawyer. On the launch day in Belfast I watched members of the public approach, obviously intrigued by the jukebox which, just like its musical counterpart plays your selection at the press of a button.

Maria McManus has curated several of these installations in Belfast and Dublin and my haibun (prose plus haiku) Finding Narnia was selected for this curation that featured twenty poems from around the world, inspired by the work of CS Lewis. 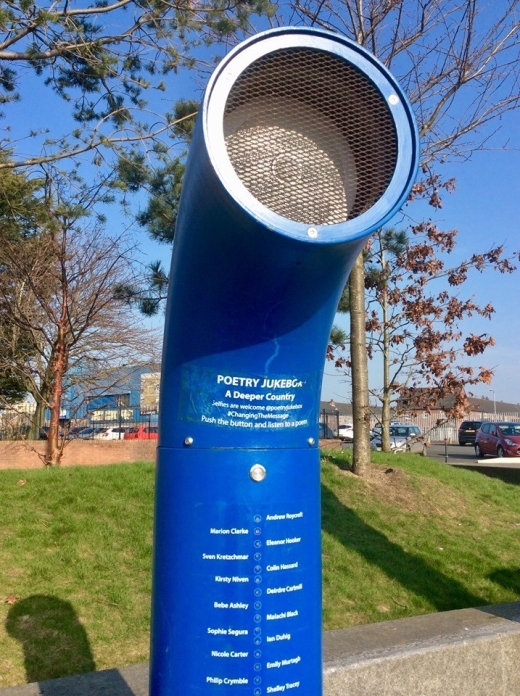 Overlooked by this huge statue of Aslan from Lewis’s Chronicles of Narnia, the square was the perfect location for the launch of this curation.  Tade Ipadeola maintains a keen interest in all things CS Lewis-related and it was a real honour to have been involved in this amazing project.

Poetry Jukebox is a Quotidian–Word on the Street Ltd Project supported by the Arts Council of Northern Ireland. 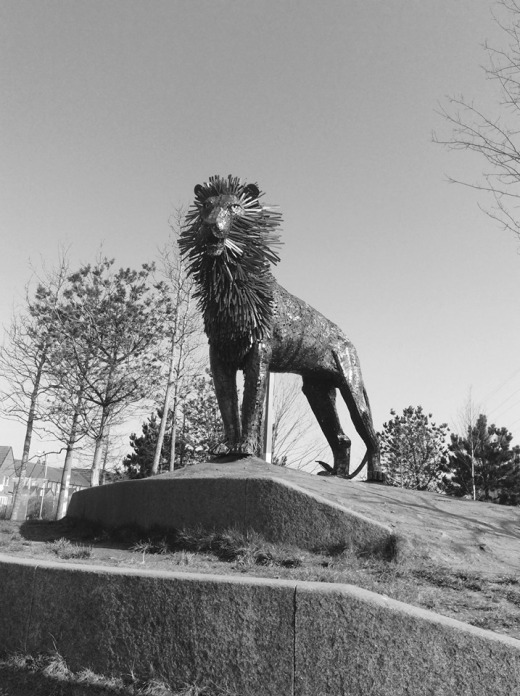 Some images from my label distribution day…just because Warrenpoint is such a pretty place to live. 🙂 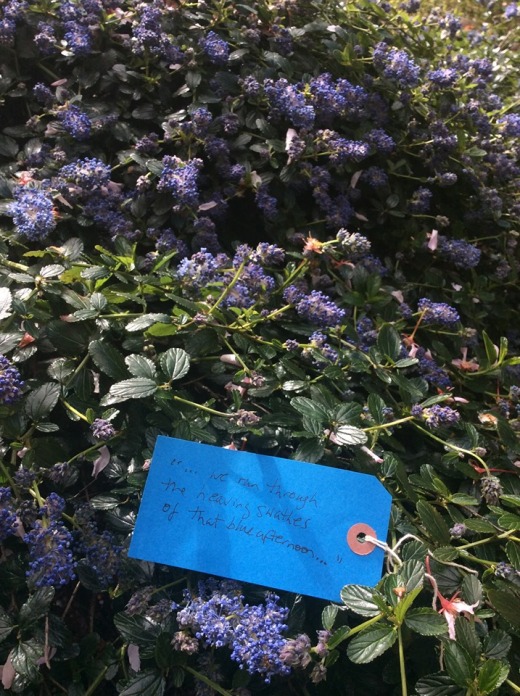 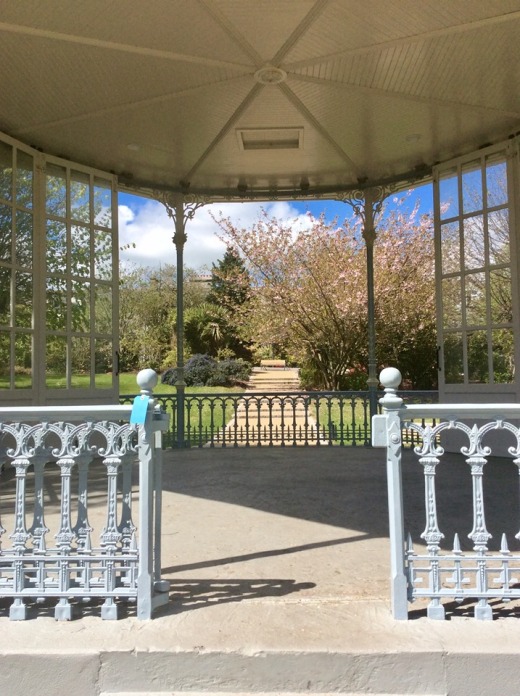 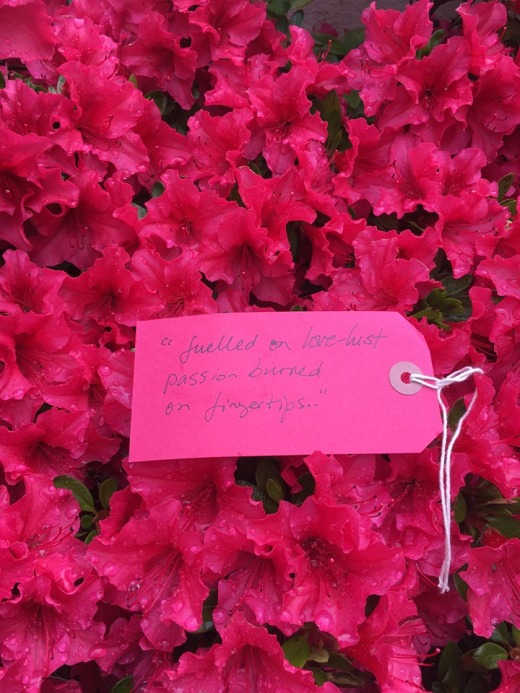 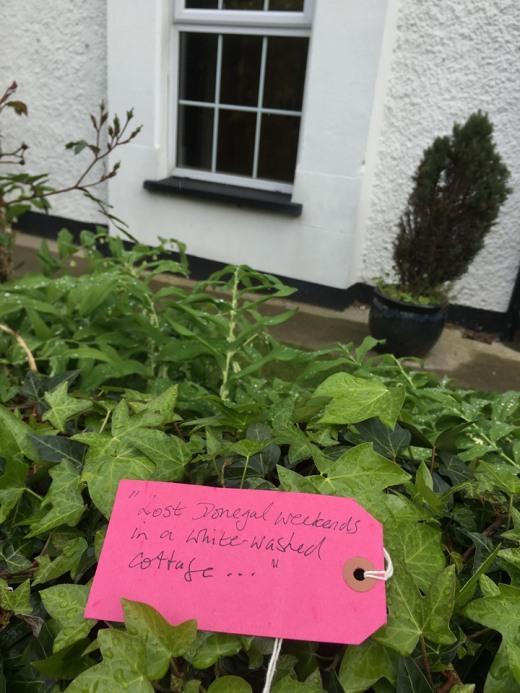 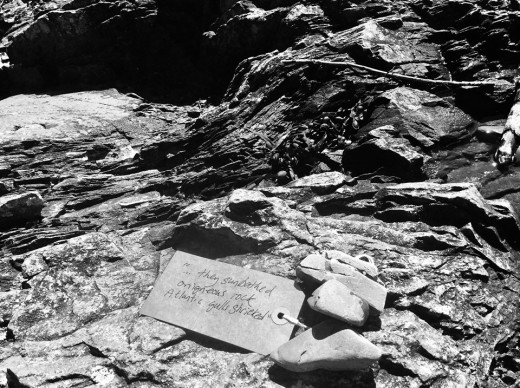 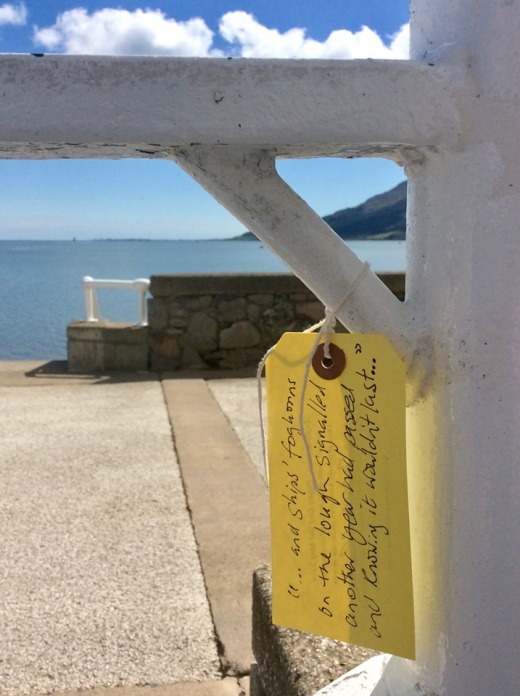 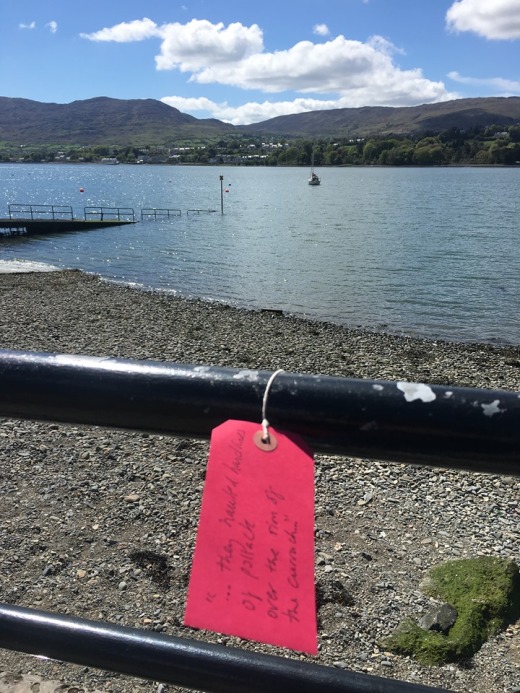 Posted on March 22, 2019 by seaviewwarrenpoint

I have added this haiku to my latest painting ‘Dreaming of Donegal’  … in memory of an old friend. 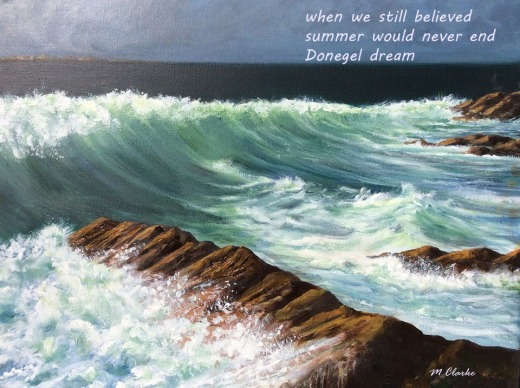 Posted on October 29, 2018 by seaviewwarrenpoint

Thanks to writer and editor Kate Garrett,  my poetry and artwork feature in this spooky issue of Three Drops from a Cauldron. It’s good to be in the company of such fine writers and artists at Halloween.

Thanks also to editors Chase Gagnon and Lori A Minor who selected my featured haibun Rejuvenation Spell as runner up in their Halloween contest last year in  Scryptic – Magazine of Alternative Art. 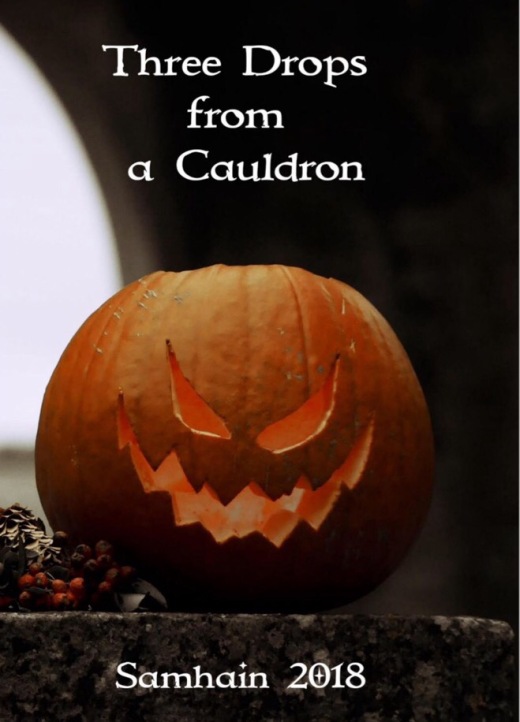 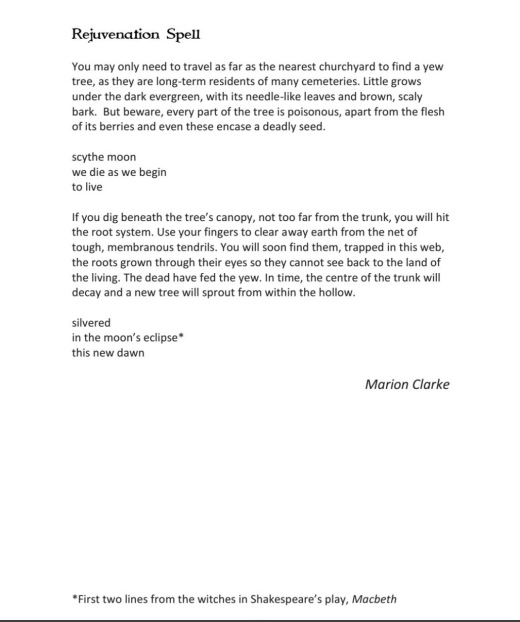 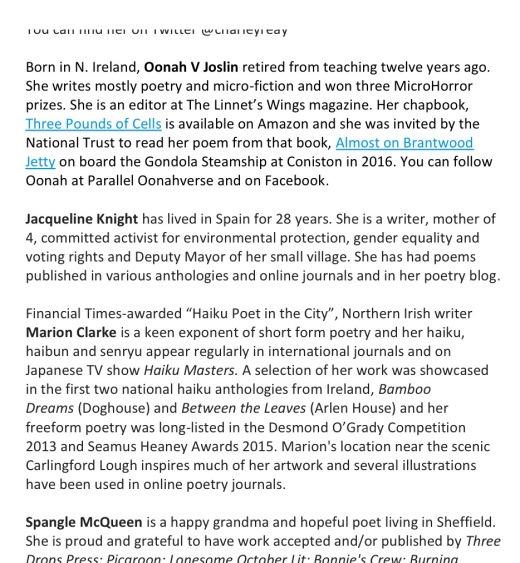 Posted on July 31, 2018 by seaviewwarrenpoint

Below is a haiga, in this case a combination of a senryu and photograph, in response to a writing prompt on Creative Writing Ink 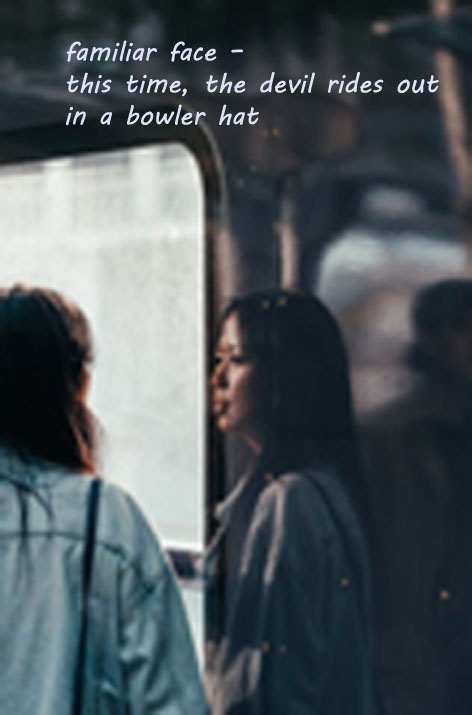 More than just music at the Fiddler’s Green festival

Posted on July 18, 2018 by seaviewwarrenpoint

END_OF_DOCUMENT_TOKEN_TO_BE_REPLACED

Posted on June 7, 2018 by seaviewwarrenpoint

Published this week on the Africa Haiku Network …

Posted on June 4, 2018 by seaviewwarrenpoint 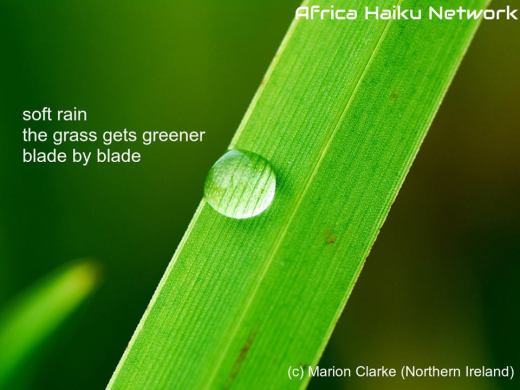 Posted on April 26, 2018 by seaviewwarrenpoint

I have a few in there. Once I started, it was difficult to stop as there were so many inspiring poems! 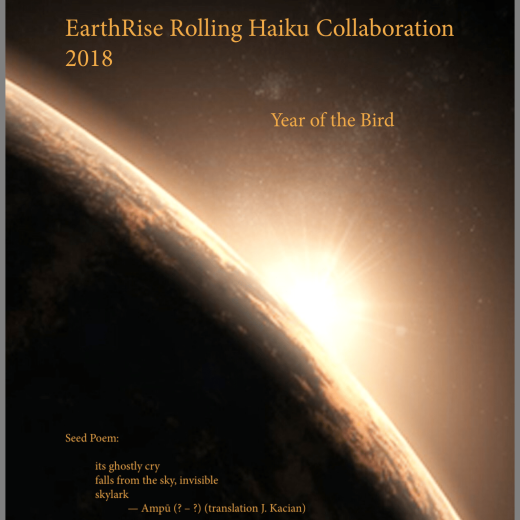 Posted on April 19, 2018 by seaviewwarrenpoint

, Well done to Paul T. Corrigan, whose poem I selected as winner of Rattle Poetry “Artist’s Choice Award” in their recent Ekphrastic Challenge.

A detail from a cottage scene in the Mourne Mountains here in Northern Ireland was the visual prompt for March. I won’t spoil the surprise, but Paul’s poem Wildflowers refers to something quite far removed from the idyllic scene depicted in the landscape (a painting commission I undertook some years ago for an old lady who grew up in such a dwelling.)

I have just realised that Paul has won the Ekphrastic Challenge before, so double congratulations are due.

Oh, and just listen to the recording of his poem!

Well done to Marietta McGregor who was winner of the “Editor’s Choice Award” the following week with her wonderful haibun, The Visitant.

You can also listen to her recording here. 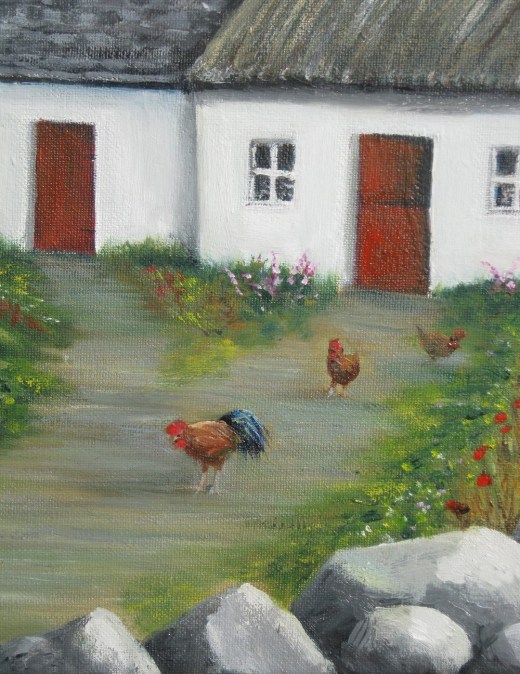